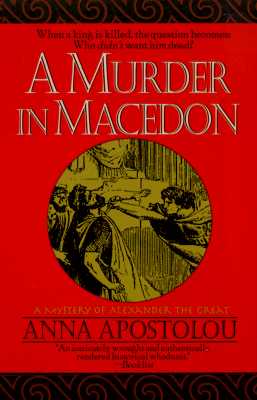 MURDER IN MACEDON, A

Beware of Greeks bearing knives...
In the summer of 336 B.C., Philip of Macedon has summoned all of Greece to join him in celebration in the old capital of Aegae. As he enters the arena filled with his loyal subjects, he is brutally stabbed by the cruel dagger of Pausanias, a young captain of his guard. Soon the palace corridors are awash in fear and chaos: Philip's ex-wife, the witch Olympias and mother of his son Alexander, plots the violent death of his young successor; Alexander, unconvinced that Pausanias is actually his father's executioner, scours the city for a killer amidst rumors of his own illegitimacy; and everyone, including Alexander himself, falls under the dark cloud of suspicion.
As Alexander struggles to fill his father's role as ruler of Greece, he calls on the help of his young Hebrew friends Miriam and Simeon to uncover not just Philip's assassin, but the mystery of his own origins. From the dark chambers of Olympia's lair to the sun-baked streets of ancient Greece, Anna Apostolou unfolds a magnificent tale of antiquity and intrigue in rich historical detail.

Title: MURDER IN MACEDON, A

MURDER IN MACEDON, A