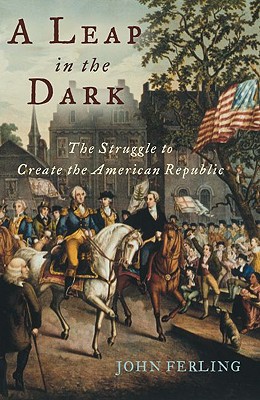 LEAP IN THE DARK

It was an age of fascinating leaders and difficult choices, of grand ideas eloquently expressed and of epic conflicts bitterly fought. Now comes a brilliant portrait of the American Revolution, one that is compelling in its prose, fascinating in its details, and provocative in its fresh interpretations.
In A Leap in the Dark, John Ferling offers a magisterial new history that surges from the first rumblings of colonial protest to the volcanic election of 1800. Ferling's swift-moving narrative teems with fascinating details. We see Benjamin Franklin trying to decide if his loyalty was to Great Britain or to America, and we meet George Washington when he was a shrewd planter-businessman who discovered personal economic advantages to American independence. We encounter those who supported the war against Great Britain in 1776, but opposed independence because it was a "leap in the dark." Following the war, we hear talk in the North of secession from the United States. The author offers a gripping account of the most dramatic events of our history, showing just how closely fought were the struggle for independence, the adoption of the Constitution, and the later battle between Federalists and Democratic-Republicans. Yet, without slowing the flow of events, he has also produced a landmark study of leadership and ideas. Here is all the erratic brilliance of Hamilton and Jefferson battling to shape the new nation, and here too is the passion and political shrewdness of revolutionaries, such as Samuel Adams and Patrick Henry, and their Loyalist counterparts, Joseph Galloway and Thomas Hutchinson. Here as well are activists who are not so well known today, men like Abraham Yates, who battled for democratic change, and Theodore Sedgwick, who fought to preserve the political and social system of the colonial past. Ferling shows that throughout this period the epic political battles often resembled today's politics and the politicians--the founders--played a political hardball attendant with enmities, selfish motivations, and bitterness. The political stakes, this book demonstrates, were extraordinary: first to secure independence, then to determine the meaning of the American Revolution.
John Ferling has shown himself to be an insightful historian of our Revolution, and an unusually skillful writer. A Leap in the Dark is his masterpiece, work that provokes, enlightens, and entertains in full measure.

Title: LEAP IN THE DARK

LEAP IN THE DARK